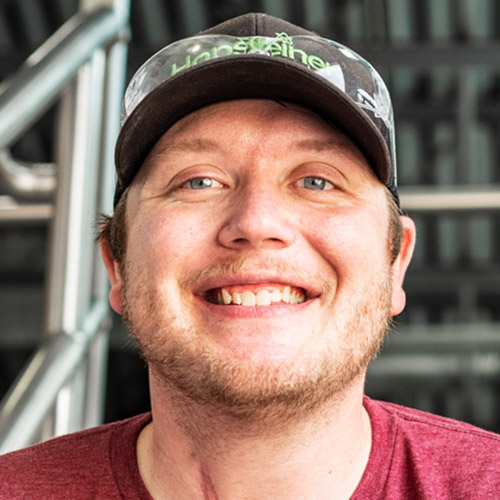 Aaron, our Wisconsin ex-pat, excels at all areas of the brewery that are thrown his way. Because at Alter we all share the load as much as possible, Aaron works anywhere from packaging to brewing. One of his strengths is being inquisitive about practices and methods, diligently combing the entire process to make things run smoother and taste better.

Aaron began his career in the brewing industry in 2017, starting off as a brewing assistant in his hometown of Oshkosh, WI at Fox River Brewing Company. From there moving to Sheboygan, WI to be a brewer and centrifuge operator at 3 Sheeps. After having their first child (Lily) Aaron and his wife Kelsey moved to Illinois to be closer to family. After working a short stint in Chicago at a large contract brewery, Aaron knew he wanted to go back to working at a smaller facility where he could create and tweak recipes, develop a brand, and get his hands back on barrel aging beers. Alter presented that exact opportunity and he started with us in April of 2021.

Born and raised in Oshkosh, Wisconsin, most people (including Aaron himself) never thought he would leave his small town, let alone the state of WI. And although these days he does miss his homeland, he finds himself enjoying many things the Chicagoland area has to offer (especially the food). Aaron is an avid outdoorsman and has taken many hiking trips, including a week in the backcountry of Glacier National Park in Montana and summiting Mt Kilimanjaro in Tanzania, Africa on a charity climb with his wife’s nonprofit. Though his current reality includes summiting more playground equipment with a toddler than mountains. When he is not brewing beer at work, thinking about beer, or drinking beer, you can often find him smoking meats or trying out new ethnic foods with his friends. Aaron will never judge you on the type of beer you drink but he will judge you on the type of cheese you eat.

“Some beautiful paths can’t be discovered without getting lost.”